How to decorate with mid-century modern style on a budget 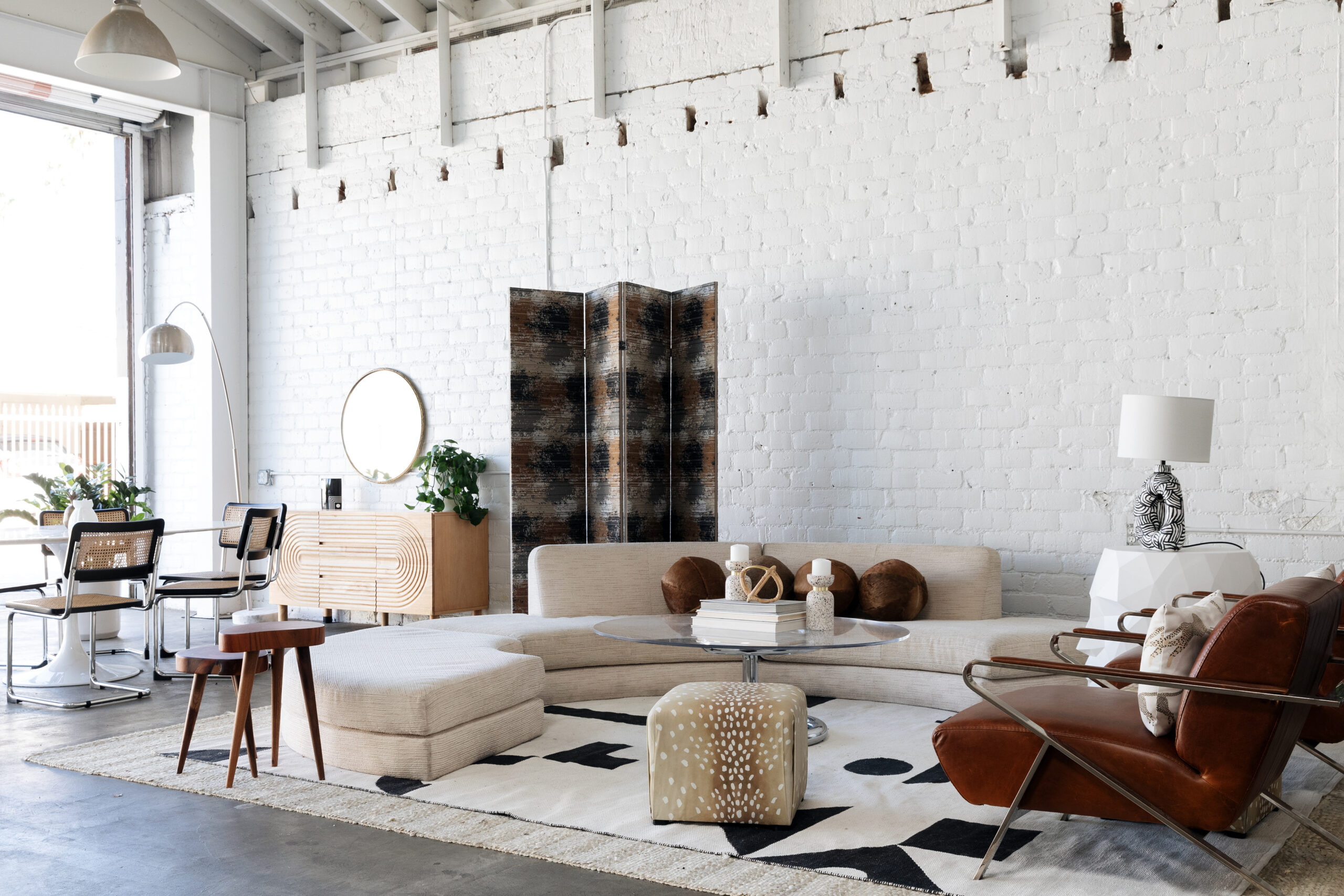 Mid-century modern is probably a design term and style you’ve heard tossed around before, even if you aren’t super familiar with its background and history. Perhaps you’ve seen it in a catalog or asked a friend about their sleek wooden antique chair that looks almost too perfect to sit on? It has been a highly sought after interior design style since the 20th century, and it is still going strong today. From interior designers to celebrities, everyone is dying to get some of this minimalist’s dream design style in their home.

Like other popular styles, it can be hard to find mid-century modern pieces at budget friendly price points. Don’t get us wrong, we are big believers in going for a splurge-worthy item or two, especially if you truly fall in love with something. However, we also hold true to the idea that design should be accessible to any and everyone. We’ll use this post to give you a brief intro into mid-century modern furniture and how to create a modern home you will absolutely adore without having to break the bank.

What is mid-century modern style?

While we often refer to mid-century modern as a style, it was originally an American design movement born out of the Bauhaus style in the post-World War II era. Bauhaus was both a German style and architecture school that emphasized clean lines and rejected the ornamental styles that came before it, such as Art Deco. While the movement itself is American, it was heavily influenced by Bauhaus when German designers and artists emigrated to the United States. Unlike some of the previously less accessible decorating styles, mid-century modern was easily mass produced and as a result quickly spread throughout homes in America.

Not too much has changed when it comes to mid-century pieces today — they still look almost as they would have in the 1950s, which is quite remarkable. Mid-century modern furniture is still known for its clean and simple lines that reject embellishments. If you’re ever stuck wondering if something is mid-century modern, there are certain elements that are helpful when identifying the style. The use of sleek, simple lines is probably the biggest giveaway that something is mid-century modern. For example, if you see a coffee table that has Chippendale style feet, you’ll know right away this sort of rich-looking ornamental design isn’t consistent with the stripped-down modernist style. Muted or earthy tones paired with bright colors is another giveaway. Often, you might see a blush pink or lush navy velvet mixed with an earthy, natural wood frame or base.

What are mid-century modern colors?

We already touched on how colors are important when it comes to spotting this modern look, but like many home decor styles there’s no one right answer. The base of a mid-century modern piece is almost always either wood or metal, but the colors themselves are much more expansive. If you do a quick Google search, you’ll be quickly inundated with artist palettes showing a mix of bright colors like pinks, blues, greens, oranges and yellows alongside some neutrals, such as white, grey, and tan. Perhaps the best way to sum up this combination of hues is retro and eclectic. Although we’d be remiss if we didn’t note that you can fit this style into your personal decorating preferences, regardless of your style. If you’re all about sleek white interiors with a hint of beige, we can assure you there is a mid-century modern piece of furniture out there for you.

Where can you find inexpensive mid-century modern pieces?

Since this style originated in the mid-1900s, some of our all-time favorite places to shop for your home are thrift stores and antique shops. There’s a bit of the thrill of the hunt involved because you won’t necessarily have the same feeling as walking into an Ikea where everything you could ever need is in stock and ready to purchase on demand. But isn’t there something so fun about this process?! Once you find a few vintage pieces that are positively perfect for your space, you will cherish them forever.

In terms of exactly where to shop, we recommend conducting a quick Google search in your area. Even if you live in a city, you may need to drive out of town a bit to explore some of the best options. We’ve found that sometimes those hole-in-the-wall (aka on the side of the road) vintage and antique shops in small towns can have some real hidden treasures and even modern designs. Apartment Therapy has an article naming the best vintage shops in every state, so if you live near one of these, we feel confident it’s worth a visit.

Another great option is local flea markets. While many of these are seasonal, much like farmers’ markets, you should be able to find sufficient options that are open most of the year. Doesn’t a brisk but sunny morning meandering through eclectic stands with a coffee in hand sound like a delightful way to spend your Sunday morning? If you happen to live in or near Massachusetts, one of the oldest flea markets in the country is actually still going strong, Grafton Flea Market. There’s also the world-famous Brimfield Antique Flea Market located in Springfield, Massachusetts that’s open during the summer months. We’ve heard it’s a must-see if you’re in the area. (We’re also sensing a theme with these flea markets in Massachusetts!)

All of this said, antique shops aren’t the only place to find mid-century modern furniture. In fact, almost all big retailers sell at least something in this style. You could probably walk into a Target while running errands and pick up a mid-century floor lamp. If you prefer to shop from the comfort of your own home, places like Etsy or Amazon are sure to have newer spin-offs of this beloved 1950s modern decor. If you are in the market for a custom piece of furniture, The Inside offers over 100+ fabric options for a few mid-century frames, such as our Mid-Century Platform Bed and Mid-Century Bench.

Now, let’s move on to the fun stuff — outfitting your mid-century home. When it comes to creating your living room or really any room in general, we always like to say it’s a process. A room likely won’t feel complete overnight, but like your closet, it will grow overtime and one day you’ll be able to take a step back and admire the beautiful room you’ve created.

The rug: One of the best places to first start is the base, so if you need a rug, we recommend making this one of your initial purchases. Even if you aren’t sold on a rug, it might be worth looking into. Rugs can instantly make a living space feel welcoming and complete with little effort, and there are tons of affordable options out there. You can even layer smaller rugs on top of larger area rugs. It creates an instantly cozy English cottage vibe, which yes, we think can be mixed with mid-century modern. We abide by our belief that there are no rules when it comes to decorating — mixing and matching is highly encouraged.

A bar cart: A metal bar cart is another easy addition to your living room that’s also super functional. Top it with your favorite wine glasses and an ice bucket, and you’ll always be dinner party ready with little or no prep involved. Plus, they’re super stylish and quintessentially mid-century design statement pieces. We’ve seen bar carts used for other things, like a place to stack and store all of the books that don’t fit on your coffee table, so even if you don’t want to use it as a bar, it can still serve a purpose.

Chairs: Of course no living room is complete without chairs. Many people choose a number of chairs depending on the room’s size. If you have a small space, go with a couple of accent chairs paired either side-by-side or opposite each other on either side of the sofa. If you have ample space and are looking for something to fill your living room, an Eames Lounge Chair, designed by Charles and Ray Eames for the Herman Miller Furniture Company, is not only a mid-century modern icon, it’s also super functional and comfortable. Another option takes a more DIY approach, by reupholstering chairs you already have in a mid-century modern color with fabric by the yard. This is an especially cost-friendly option that can be short-term until you’re ready to splurge on some truly modern pieces.

Credenza: If a sideboard and TV stand were combined, it would create a beautiful and sleek mid-century modern piece that’s a must for your living room. Fortunately, the credenza does exist! While it is traditionally used in the dining room, many people today are actually using them as TV stands with extra storage space beneath. If you have a couple extra dining chairs laying around, they look stunning if adorned to either side of your credenza.

Decor items: Sometimes it’s the smallest changes that make the biggest difference, and this couldn’t be more true in a living room. The inclusion of modern decor items such as end tables or side tables, table lamps and throw pillows shouldn’t be overlooked. These can also provide the final touch you didn’t know you were missing.

When assessing your own living room and how you can create a modern interior, just remember decorating is a process and likely will not happen overnight. That’s part of the beauty in it though — you have time to grow into your current space and incorporate items that will not only stand the test of time but that you will love more and more as the years go by. Don’t be afraid to take a pause every now and then. We promise, your perfect mid-century living room will come together over time.