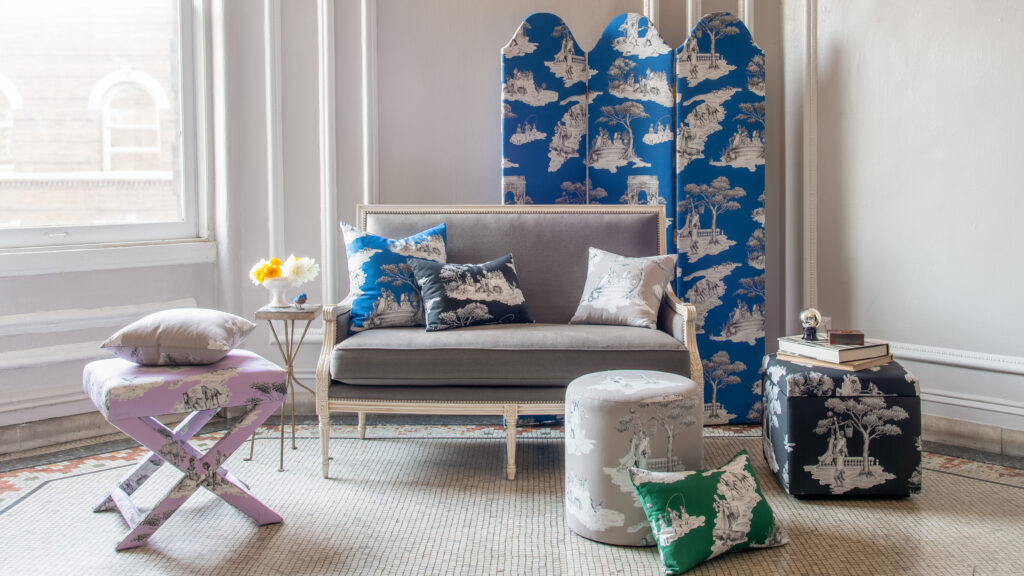 Discover the inspiration and personal stories behind the iconic pattern, Harlem Toile, as designed and told by world-renowned designer Sheila Bridges.

There are a few patterns in recent history that have already cemented their legacy as cultural touchstones for decades to come. Among those greats is a pattern developed by designer Sheila Bridges, who created one the of most iconic and celebrated designs of the 21st century: Harlem Toile de Jouy.

The story starts when Bridges failed to find the perfect toile for her own home. After deciding that it quite simply didn’t exist, she took matters into her own hands and brought her dream toile to life, calling it Harlem Toile de Jouy.

Harlem Toile de Jouy reinvents a classic decorating staple and questions constructs of representation, all while retaining its romantic appeal.

Here, we’re exploring the backstory behind Bridges’ iconic pattern, and sharing the details on how you can bring this pattern into your own home.

To better understand Bridges’ vision, it’s necessary to start by unraveling the roots of Toile de Jouy. The name “Toile de Jouy” or “Toile” for short, originates from late 18th century France and translates to “linen or cloth from Jouy en Josas,” a French town in the south-west suburbs of Paris. Toile de Jouy refers to the decorative floral, bucolic or pastoral scenes printed on a single-colored fabric. The repetitive vignettes mainly portray European traditions in black, blue, or red ink which are printed onto a white linen or cotton fabric.

The pattern was initially produced in Ireland during the mid-1700s by Francis Nixon and later introduced in France by Christophe-Philippe Oberkampf in the late 1700s. Toile de Jouy made its way to America during the turn of the 18th century, and became a lasting sensation with a resurgence in the 20th century.

A traditional French toile, from 1783 // Photo credit: The Met Museum

Today, Toile de Jouy is once again the spotlight, but this time with a contemporary twist. Sheila Bridges has revamped the pattern by highlighting rich African American culture and utilizing vibrant-colored fabric, while maintaining Toile de Jouy’s traditional formatting.

The pattern has been spotlighted in various museums including The Studio Museum in Harlem, The Museum of Art and Design in New York City and the Musée De La Toile de Jouy in Jouy-en Josas, France. Harlem Toile de Jouy wallpaper is part of The Cooper Hewitt Smithsonian Design Museum permanent wallpaper collection.

Who is Sheila Bridges?

Sheila Bridges is an author, TV personality and “America’s Best Interior Designer,” as named by CNN and Time Magazine. Bridges began her creative journey by establishing her interior design firm in 1994. As creative director, she skillfully designed numerous residences and offices for an array of renowned entertainers, entrepreneurs and business executives.

Interior designer Sheila Bridges in her home in Harlem // Photo credit: The Inside

Bridges, a Philadelphia native, made the move to New York City in 1986. Harlem Toile de Jouy honors her current town of Harlem, New York and reflects her relationship with decorative arts and the African American experience. Bridges inspiration grows from her interest in historical narratives found in design and the discussions they often raise. Stirred by the lack of African American culture represented in traditional Toile de Jouy patterns, Bridges decided to create her own inclusive pattern that tackles stereotypes often associated with African Americans.

Bridges fuses the past and present by displaying figures enjoying contemporary activities in an 18th century environment. She illustrates vignettes of men playing basketball, children playing double-dutch, couples dancing to the beat of the boom box, women gracefully braiding each other’s hair and people casually enjoying fried chicken and watermelon. These patterns, which lampoon some of the stereotypes of the African American experience, ultimately celebrate their complex history and rich culture which has often been appropriated.

Although Bridges initially created Harlem Toile de Jouy for wallcoverings, she has since expanded her collection to a variety of products (plus fabric by the yard), ranging from window shades and glassware to sneakers and speakers. And as of recently, Harlem Toile de Jouy is also available on affordable furniture through Bridges’ exclusive collaboration with The Inside.

Sheila Bridges x The Inside

The Inside x Sheila Bridges // Photo credit: The Inside

Danielle Walish, creative director & co-founder of The Inside says “To me, Harlem Toile de Jouy is iconic: it’s one of the most important textile designs of the 21st century. It forces us to question iconography and the meaning behind it.”

Bridges shares this sentiment as she has long wished for Harlem Toile de Jouy to be available on budget-friendly furniture. Bridges says “After spending so much time at home due to the pandemic, I realize more than ever how incredibly important it is to surround yourself with furniture that brings you joy but won’t break the bank. I love the fact that The Inside’s furnishings are customizable but without the long lead time.”

The Inside x Sheila Bridges // Photo credit: The Inside

Harlem Toile de Jouy is featured in five new colorways and can be applied to any of The Inside’s furniture and home décor items. Bridges says “The colorways are brand new and inspired by many of the schemes that I live with in my own homes.”

No matter how small or large your next interior project is – from the accent pillow or ottoman to the new statement sofa or bed – The Inside’s collab featuring Bridges’ toile patterns offers an accessible way to incorporate iconic designs and inspiring narratives into our homes, no matter our ancestral roots.