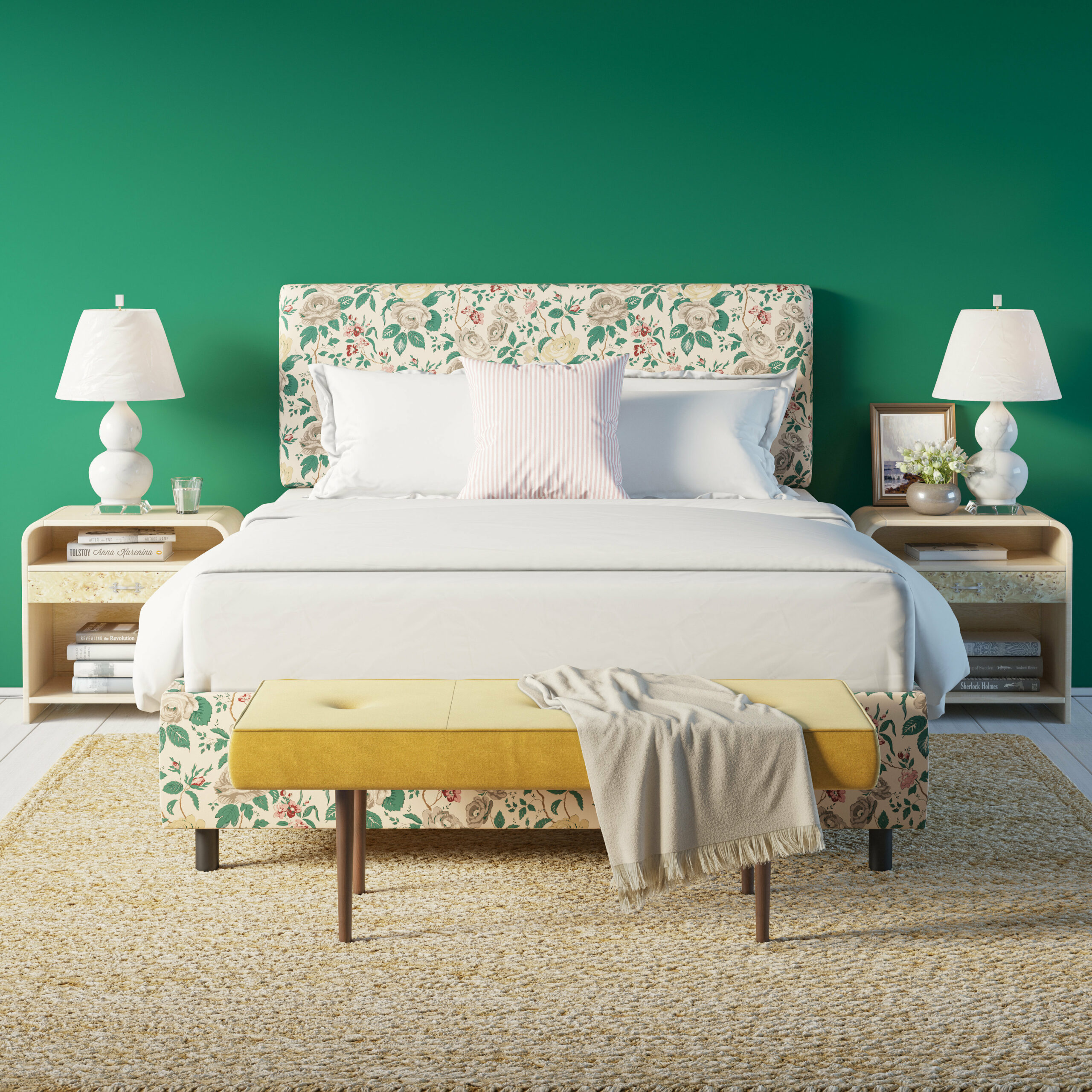 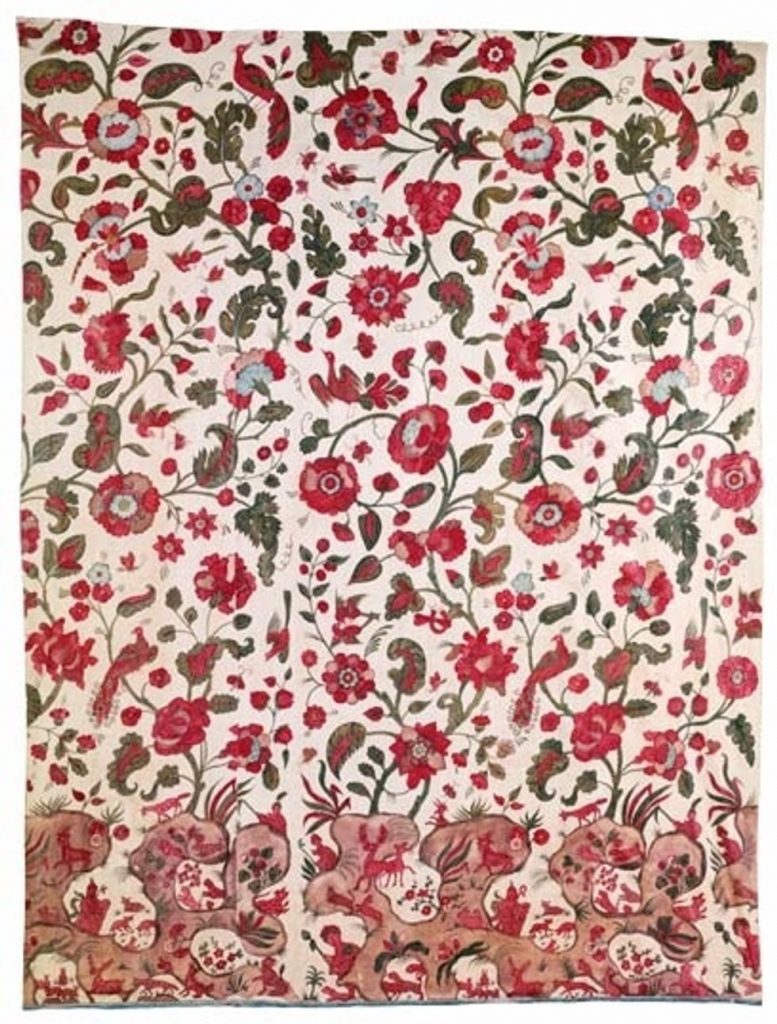 Courtesy of the Victoria and Albert Museum.

It is hard to find a textile as enduring as the printed floral. Originally imported from India, chintz has gone in and out of style for over 500 years and gets its name from the Hindi word “chint,” meaning spotted or variegated. This beloved fabric, which was originally made from printed and glazed cotton, features flowers and other patterns in a multitude of colors. The Dutch and Portuguese traders first introduced chintz to Europe in the 17th century, and it quickly took off. When the aristocracy in France and England first laid their eyes on the fabric, they were surprised by the saturated colors of the dyes. But by the late 17th century, chintz was so wildly popular that both France and England were forced to temporarily ban the fabric in order to protect their own textile mills. As lore has it, the king and courtiers at Versailles chose to flagrantly ignore the ban on chintz and used it widely for both furnishings and court fashions. The European manufacturers tried to reproduce the look of the Indian fabric, but they were unable to reproduce the colors so vividly. Indian craftsmen had an advantage because they used natural, local dyes, such as indigo, cochineal, and logwood, that were unavailable to Europeans at the time. 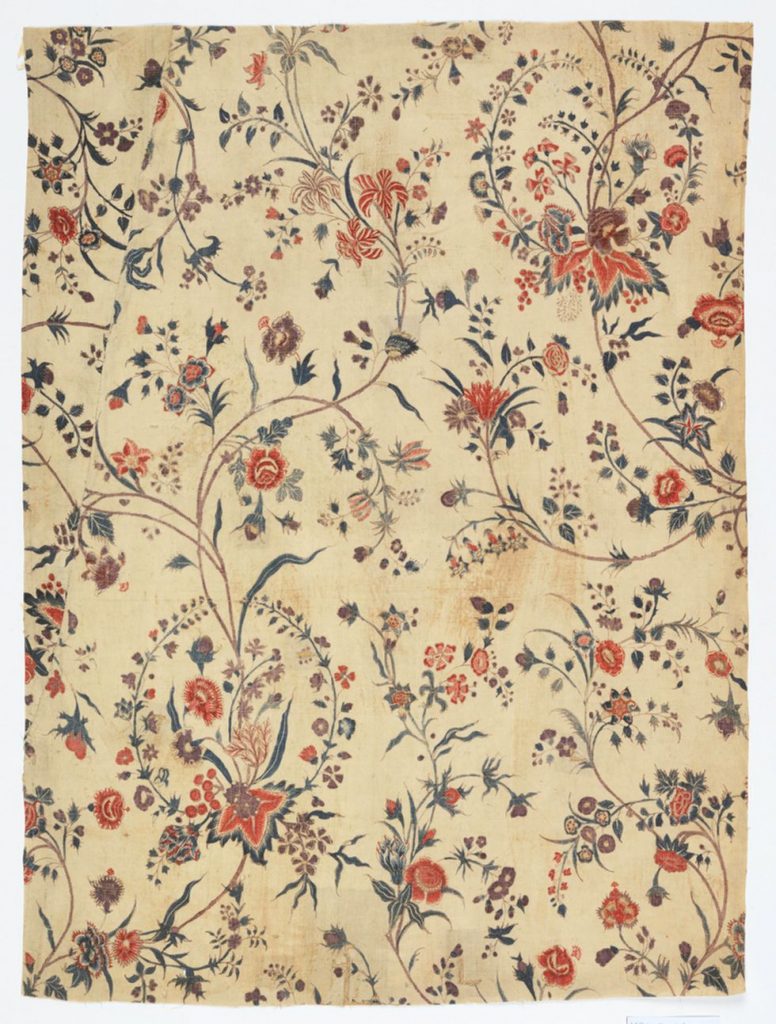 The chintz craze continued into the 1800s, and with the Industrial Revolution, European factories were finally able to produce the fabric on their own. With the invention of colorfast dyes and copperplate printing, European chintz could be manufactured with virtually the same look and feel as imported textiles. Chintz is arguably one of the first “performance” fabrics. As noted by curator Crosby Stevens, “It’s a very practical, very tough fabric. You can wipe it clean – it was a very Victorian thing to be against dust.” 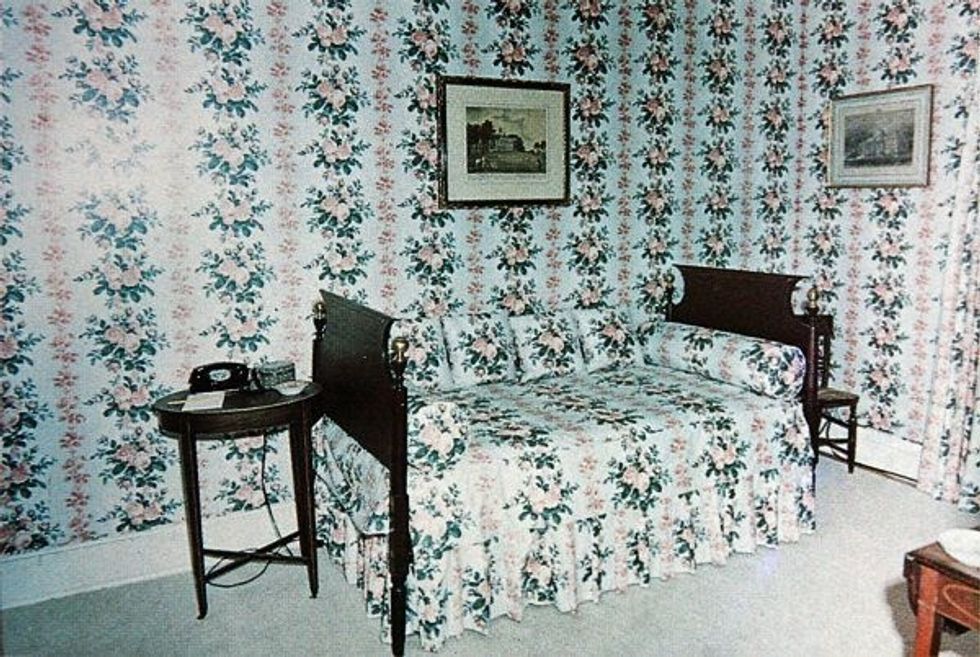 The 20th century saw the chintz look come and go. After the first world war, chintz fell out of fashion, as it represented the old world. It came back in style in the 1940s and then again in the 1960s when Jackie Kennedy’s 1963 renovation of The White House featured “orange blossom” chintz. It surfaced again in the early 1970s alongside both the “flower power” movement and the renaissance of fabric houses such as Colefax & Fowler. 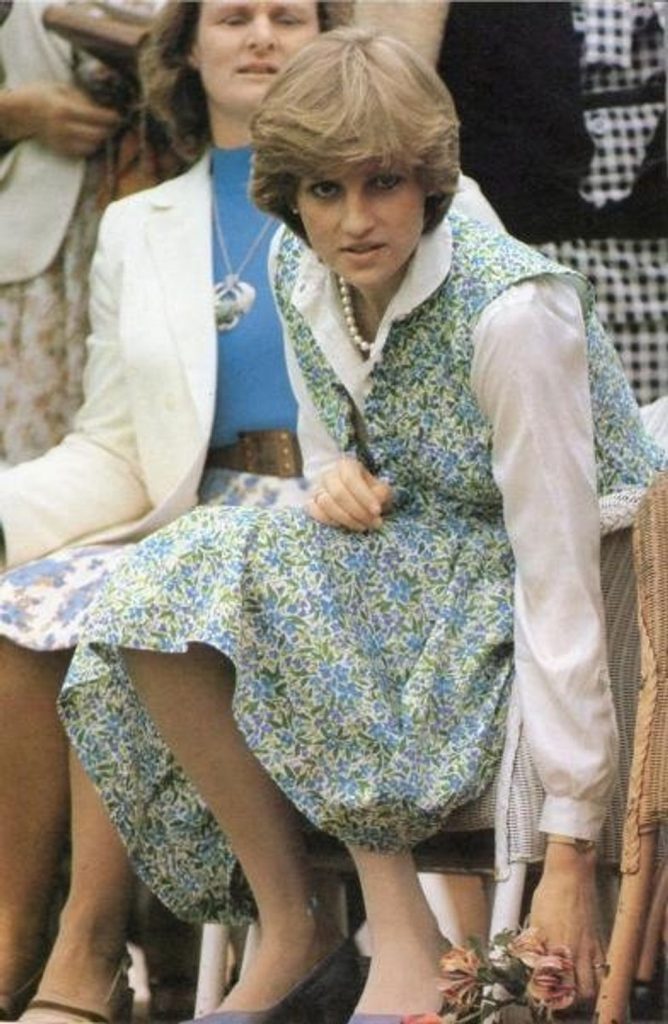 By the 80s, chintz made its way back onto the runway thanks in large part to Princess Diana and home brand Laura Ashley. In late 1981, Princess Di married Charles and moved into the palace with a wardrobe of Laura Ashley’s perfectly English chintz dresses. The Sloan Rangers took to it instantly, and two years later Bill Blass used Rose Cumming’s Cabbage Rose in his spring collection. Mario Buatta, who was aptly dubbed the Prince of Chintz, used the classic cloth on every surface possible. The flower became a backdrop of 1980s popular culture, evident in the sets of cult classic films like Risky Business and Pretty in Pink. And once again, The White House revived the tradition of chintz at the hand of Nancy Reagan and her decorator Ted Graber. With a style that he coined as “trend-resistant traditional,” Graber used chintz in the President’s Study, the First Lady’s dressing room, and many of the other sitting rooms of the Reagan White House. 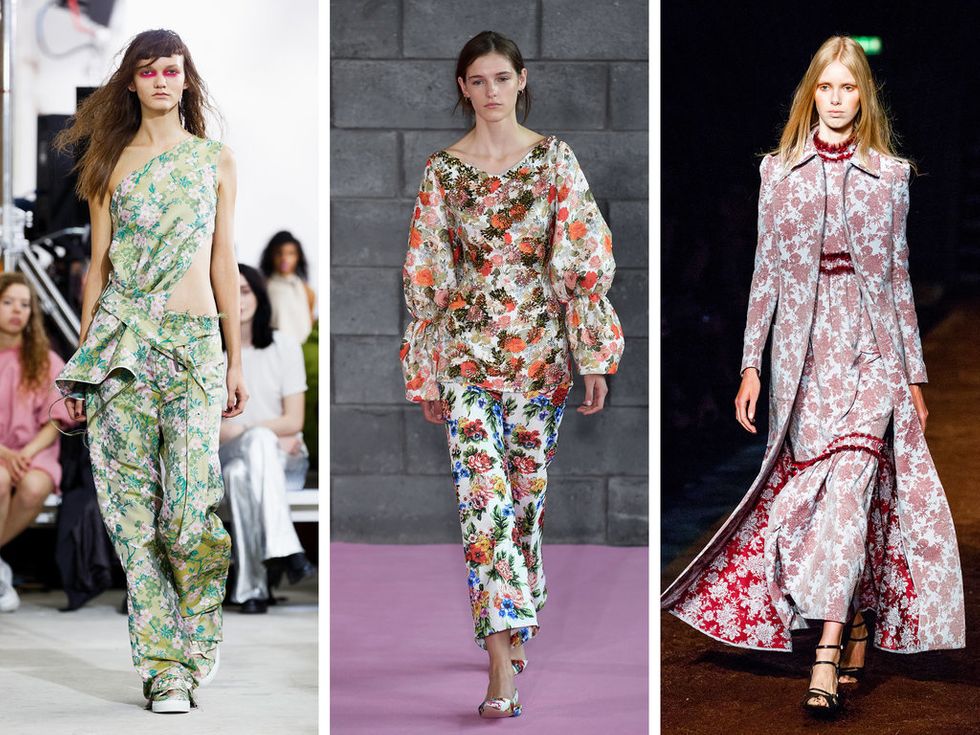 Courtesy of The New York Times.

By the 90’s IKEA advised the world to “chuck out chintz.” Along with scrunchies and shoulder pads, the floral was dead. According to House & Garden, UK chintz was maligned because of its over-exposure in the 1980s. “Every single issue of the magazine within the decade is replete with glorious swags of the stuff draping windows and covering unashamedly frilly sofas.” Design greats like Albert Hadley threw out their florals in favor of beige and white, and that was it for chintz. At least until recently.

Perhaps as a reaction to the endless sea of beige imagery flooding social media or the growing influence of Gucci Creative Director Alessandro Michele, chintz has made a major comeback. “I’m like a thief of the granny wardrobe. There’s always something from the past that can match in a beautiful way with something new,” remarks Michele. 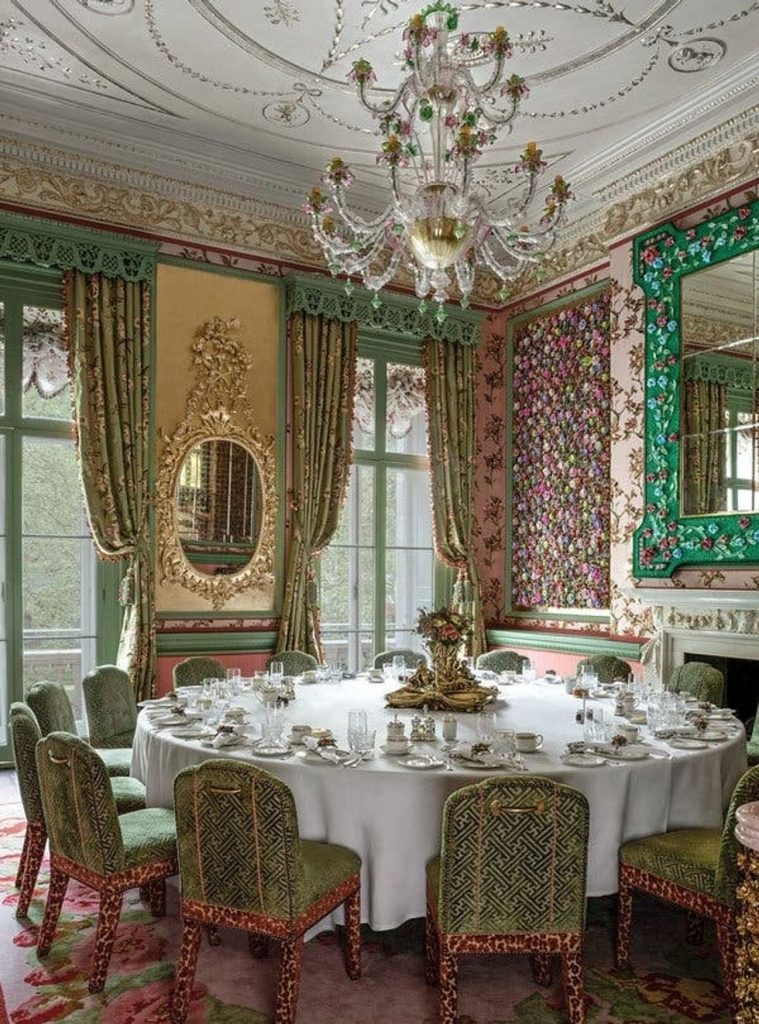 In the world of decorating, the Brits are having a major moment. From the design of the Royal living quarters by Ben Pentreath to the recently reinvented Annabel’s by Martin Brudnizki, the old is ever so new. British Designer Alex Eagle sums it up perfectly: “Florals are at the root of British interior design. Championed by Sibyl Colefax, they add warmth and color and bring the garden inside. They are the antithesis of the sleek paired back minimalism that has been so fashionable. Florals are fun, vibrant, and hugely decorative.” Whether you are escaping or celebrating, chintz is back and causing a decorating riot all over again. 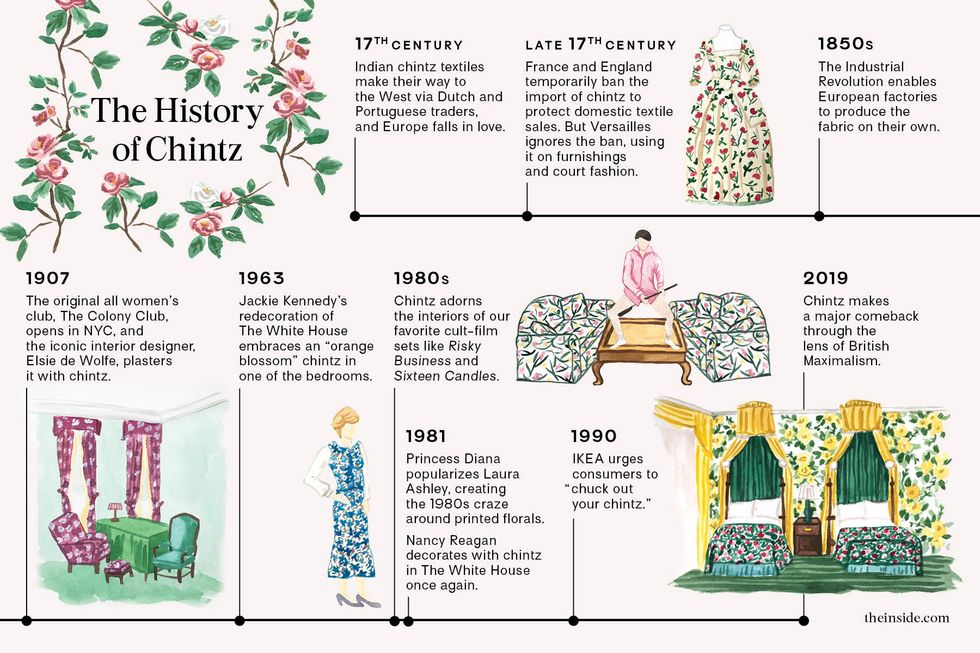